Cougar Creek is fortunate among urban/suburban streams in that its riparian zone is on the whole quite wide and well-vegetated, especially through most of the canyon from Nicholson Road to Westview, and in much of the Delta Nature Reserve. Nonetheless, there are many stretches that need our help – in particular those areas where development has encroached too far into the riparian zone, leaving insufficient vegetation.

Cougar Creek Streamkeepers began work on the Rai Medical Building site at 6905 Scott Road, North Delta, in April 2004. At that time, all the trees and much of the ground were heavily infested with English ivy, giant knotweed, “old man’s beard” clematis, and Himalayan blackberry.

Illegal tree-cutting had produced piles of slash that littered the property, smothering native plants and alien invasives alike. Garbage, rats, homeless campers, and (rumour has it) stolen goods all found handy hiding places in the knee-deep ivy and chest-high slash. 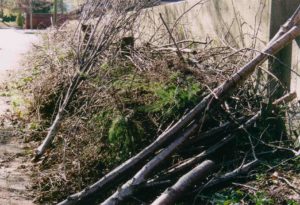 Streamkeepers removed mountains of invasive plants, garbage, non-porous landscape plastic, and small-diameter slash — all trucked away by the Corporation of Delta. Large-diameter slash (an ideal slow-release fertilizer) was integrated into the landscaping, along with many yards of municipal compost provided by Delta.

These new plantings are designed to improve streambank stability, provide habitat and shade, while at the same time preserving safety-sightlines for pedestrians using the streamside brick path. In addition, many of the native plantings that date back to 1992 when the Rai Medical Building was constructed (red flowering currant, vine maple, red osier dogwood, etc.) are now once again thriving.

Hundreds of volunteer hours later, the Rai Site attracts many compliments from pedestrians who use the brick path that runs parallel to the creek, between the streambank and the Rai Medical building. Much has been accomplished, but there is always a need for ongoing maintenance and especially litter removal.

The Rai Medical Building and its immediate neighbours sit close to the banks of Cougar Creek, between Scott Road and Nicholson Road in North Delta. The buildings are served by a patchwork of small interconnected parking lots.

Because this heavily-urbanized site is privately owned (the Rai property itself extends to the middle of Cougar Creek), the Cougar Creek Streamkeepers long regarded it as “off limits” for streamkeeper activities.

At the time of building construction (1992), existing streamside alders, cottonwoods and cherries were supplemented with plantings of red flowering currant, vine maple, red osier dogwood, berberis, Oregon grape, salal, and sword ferns, plus several Douglas firs. Unfortunately, the plantings were not maintained by the property owner, nor by the Corporation of Delta which holds a utility right-of-way along the creek.

As a result of this lack of maintenance, the site was gradually invaded by English ivy, giant knotweed, “old man’s beard” clematis, and Himalayan blackberry. Most of the native plants disappeared from view, and some died. In the fall of 2004, in an attempt to improve sightlines and safety for pedestrians using the then-overgrown footpath alongside the building and the creek, the building owners cut down all the young Douglas firs, many cherry trees, and various shrubs. All the slash was left on site, much of it smothering native plants and alien invasives alike.

Streambank tree-cutting is of course illegal under the federal Fisheries Act, and was also in violation of the Delta utility right-of-way along the creek. Cougar Creek Streamkeepers therefore filed a complaint with Canada’s Department of Fisheries and Oceans and with the Corporation of Delta. Negotiations were undertaken with Dr. Kuljinder Rai, and an informal agreement was reached to fund the Rai Medical Building Streamside Restoration Project with money from Dr. Rai herself, the Streamkeepers, and Fisheries and Oceans Canada through its community program administered in the North Delta area (at that time) by Joe Kambeitz. Delta, for its part, provided free support services for the project, such as supplying municipal compost for soil amendment and water retention.

The Soh Site is critical to the health of Cougar Creek. This streamside property lies Immediately south of the creek at Scott Road in Delta, and would originally have been a forested wetland providing the overhanging tree canopy and steady supply of filtered rainwater that are both so essential to creek health.

Surrounded by development, the property sat as an empty lot for many years, gradually attracting piles of litter and being overgrown by invasive Himalayan blackberry, giant Japanese knotweed, and “old man’s beard” clematis. At long last, an attractive duplex was shoehorned into one corner of the lot, with the rest of the property (though still privately owned) designated as riparian zone.

The development permit required removal of the invasive blackberry, knotweed and clematis, and replanting of the riparian zone with 500 native trees and shrubs – a costly proposition for any property owner. Cougar Creek Streamkeepers volunteered to do all the planting (they weren’t so crazy as to volunteer for blackberry removal!), as well as ongoing maintenance until the new plants were established and the invasives completely under control.

Phase I, October 2008, saw the planting of 400 trees and shrubs; 100 more followed in Phase II, October 2009. Increased shade from the new trees is gradually discouraging Himalayan blackberry, while regular “Invasives Patrol” of the Soh Site has apparently eradicated Japanese knotweed and Old Man’s Beard clematis as of August 2018. 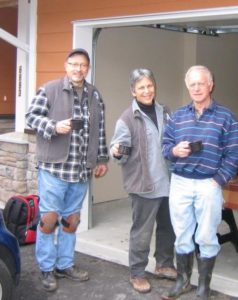 Heavy stormwater flows in Cougar Creek cause streambank erosion and saturated soils, which in turn can lead to toppling of trees.  Strategic streamside planting of native trees and shrubs is therefore an on-going activity for Streamkeepers, sometimes assisted by Scouts, Guides or other volunteer groups. If you have small cedars, hemlocks, Sitka spruce, Douglas firs or other native trees to donate, we’ll be happy to plant them!

Immediately west of Westview Drive, Cougar Creek makes an unnatural 90-degree turn northward. (It originally flowed southwest, skirting Burns Bog and emptying into Boundary Bay.) No surprise, this sharp bend in the creek has been prone to erosion — helped along by dogs and people unable to resist the lure of splashing into the creek from the shallow banks.

City of Delta Climate Action & Environment set about improving fish habitat and reducing erosion in fall 2019, with the addition of “crib-boxes” (see photos in slideshow below). Streamkeepers and other volunteers helped Delta plant the crib-boxes and adjacent streambanks with about 300 native trees and shrubs. Soon after, resident fish and salmon spawners could be seen taking advantage of the deeper pools and quieter waters created by the crib-boxes.  Time will tell how these improvements fare, given the large volume of piped stormwater runoff pouring into Cougar Creek, as well as the gravel & sediments that are deposited at Westview Bend by that runoff.

What’s a rain garden, and why should I care?